There are numerous ongoing initiatives to help rescue horses and ponies from slaughter.  Among the most important are legislative initiatives to end the cruel and inhumane methods in which the animals are brought to slaughter.  While equine slaughter and the subsequent sale of horse meat may be substantiated on different levels, there is no excuse for the animals subjected to this process to suffer needlessly in there final moments before leaving this world.  While federal laws currently prohibit the sale of horse meat within the United States, there are no laws in place to prevent anyone from selling horses intended for human consumption internationally.

The ASPCA, along with many other organizations, is doing their part to prevent the cruel and horrific processes involved in the equine slaughter industry.  The ASPCA advocates for a federal ban on the international and interstate transport of horses intended for human consumption. Over the last few years, different bills that would have achieved this have been introduced in Congress—and even though each one has had strong bipartisan support, none have made it over the finish line and become law.

Please join the ASPCA Advocacy Brigade if you would like to be alerted when it is time to take action on horse slaughter-related legislation. 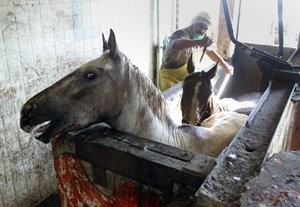 Horse slaughter can never be conducted as a humane business given the biological nature of the horse.  Horses are highly sensitive prey animals who are instantly aware of there surroundings and can sense the fear and death that is imminent at slaughter house.  Even if changes in their transportation and care prior to slaughter could be improved, the fact that equines are so highly tuned in to what’s going on that it would be near impossible to prevent their panic and stress that would ensue prior to their slaughter.