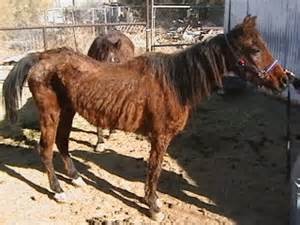 Too many racehorses start their lives in the glitz and glamor of the racehorse industry and end up awaiting an agonizing death at a slaughterhouse in another country.  While the Thoroughbred racing industry is certainly a major player toward the total number of Thoroughbred rescues currently in progress, the horse breeding industry in general is a major contributor to this problem.

In November 2011, Forbes Magazine published an article regarding this critical issue.  “More than 10,000 U.S. Thoroughbreds a year ship to slaughterhouses in Canada and Mexico, slightly more than the 7,567 yearlings sold at auction in 2010 to American, Japanese and Middle Eastern billionaires, among others.”